Rods are thrown on a conveyor belt. The belt stops for a short period and starts rolling again. From the the conveyor belt, the rods fall into a nearby cradle. Rod batches are created by this process. Daily rods continually cycle through this process creating batches. The rods must be counted. Surprisingly this simple task is still performed manually. And by counting each bundle multiple times, the “counter” believes his results are reliable. A steel rod factory approached us to automate this process and make the count absolutely accurate..

There were several approaches which were considered as a solution.

Although the above stated processes are proven to be accurate, our client was reluctant to use it due to the invasiveness of the process deployment and cost. They needed a pure computer vision way, meaning a count from a live video stream of the rods.

For our challenge, all that was needed to solve this rod counting is a vision sensor. The vision sensor has to be placed where it assures a clear view of the rods and adequate luminosity. Then a rod counting algorithm is produced to finalize the process. It is applied frame by frame to the video stream for the intended result, automated counting.

The Chosen Approach Computer Vision And Its Challenges:

One of the main challenges of computer vision is correctly segmenting objects. Another challenge is the lack of availability of a test case. In our case, it was very hard to differentiate some background noise generated by objects from the test case. There was no single image of just background area, so the foreground area couldn’t be separated from that image. For that reason, a particular region of interest has to be set in the image to resolve this issue: 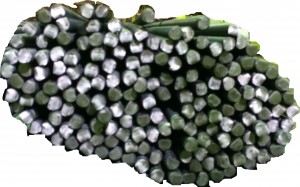 Videos are also very pulsatory. Think of it this way. It is very difficult for a human being constantly shaking his head to also perform a task while shaking. There must be a clear and steady view to perform a task. For that reason, it was very challenging to factor out these obstacles and construct a robust algorithm to provide a dynamic solution through computer vision.

Figure 03: After processing a sample image

Our client’s goal was at minimum 95% accuracy. We have surpassed that, but we are  still not able to achieve 100%. We continue to research a solution to reach this. However, we have been able to ensure 100% accuracy by computer vision when an object is on a conveyer belt that is separate and distinguishable.